Mistress Annalise is a sadistic mistress. She enjoys it when others are miserable and it is even better for her if the misery is inflicted by herself. That is why she had to make sure she did something cruel to her slave as punishment for what he had done. She decided on shit and used her shit to cruelly dominate her slave. She forced him to eat her shit and swallow it.

Princess Nikki was bored and that was one of the worst things for her slave. That is because she tends to be creative and to try all kinds of stuff that get into her head. Today she decided to try shit fetish and her friend was the one she wanted to try it on. She shit into his open mouth before making him wash the shit down using her pee.

Alina is an unforgiving mistress. When she learned of what her slave had done, she knew she would not let it go. She had to punish him for it so that he would learn from it and never do it again. She took him to her bathroom and filmed as she punished him using her shit fetish. She undressed as he lay down on the floor and shit into his open mouth.

Mistress Michelle was feeling like doing something nasty but she did not know what. After much thought, scat fetish sounded like the best idea. She got herself a slave and she had fun humiliating and degrading him. She even called her friend and the two mistresses took turns shitting on the slave. They made sure the slave ate and swallowed the shit. It was so much fun for them and that is what led to their scat fetish.

Mistress Tina sure knows how to punish a slave. She did not want to punish him everyday. She wanted one punishment that he would never forget and that would be enough. After much thought, she settled on scat fetish. She humiliated her slave by shitting on him and making him chew it and swallow it. She even called her friend who also shit on the slave. They even fed him shit using a spoon.

Mistresses punish guy for playing them

Princess Mia and Stella discovered they were dating the same guy. He had managed to play them for some time but now that they found out, they did not fight the way he thought they would. Instead, they gang up on him and punished him for it. They trampled him first before shitting into his mouth. He was made to eat the shit as punishment and the mistresses on the other hand became friends.

Mistress Anna and her shit fetish

This mistress had always wondered what a mixture of shit and poo would taste like. But instead of trying it herself, she decided to make her slave try it for her. She shit into a bowl and pissed into it as well. Then she fed it to her slave. She also shit on his face directly just for fun and asked him to tell her how her shit tasted alone and how it tasted when mixed with pee. 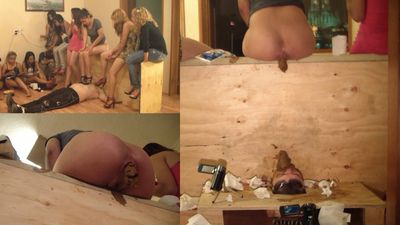 Mistress Anna wanted her slave to eat shit but he was adamant he would not. Without saying a word, she tied a string to his dick and she pulled it hard. He cried in pain and she told him the next step was to crush his balls. The terrified slave agreed to eat the shit and the mistress happily turned him into her human toilet and shit into his mouth and watched him eat it.