Mistress Alina hates lazy guys and her new slave was one. She had to show him what would happen to him every time if he did not change his ways. The mistress cruelly pissed on him and forced him to drink her pee. When he thought that was all, she also shit into his mouth and forced him to eat all that shit. She even shoved it down his throat.

Mistress Anna had to teach this loser a lesson he would never forget. She trampled the loser's dick and made sure he was in the kind of pain she wanted to inflict on him. When she was done with his dick, she got started on degrading him. She trampled him and made him lick the soles of her shoes before she made him eat her shit, which he did because he did not have an option.

Mistress shits on guy for wasting her time

This mistress does not give just anyone the opportunity to lick and fuck her pussy. She gave this guy an opportunity and he did not utilize it properly. He had a small dick and did not satisfy her. She was pissed and punished him for wasting her time. She made him eat her shit and drink her pee as punishment for it. He had no choice but to eat her shit. 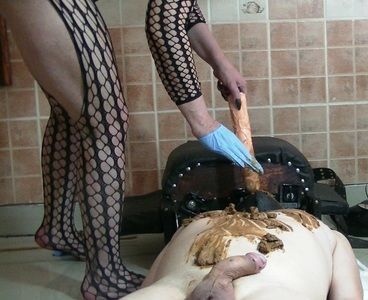